MOSCOW — Russian investigators looking into the fiery crash landing of an Aeroflot jet in Moscow, an accident that killed at least 40 people in full view of hundreds at the country’s main airport, were focusing on Monday on pilot error, equipment failure and bad weather as possible causes.

After the plane skidded to a stop on Sunday at Sheremetyevo International Airport, Russian news media reported that some passengers had insisted on grabbing their carry-on bags before leaving the burning wreckage — a violation of basic emergency protocol that would have slowed the evacuation. Videos posted online showed people walking away from the jet with luggage.

As the scale of the disaster emerged, many Russians reacted with outrage at the initial, soothing reports on state media and in a statement from the airline that had suggested that all aboard had, improbably, survived the jet fuel inferno.

The Aeroflot flight took off from Moscow on Sunday evening bound for Murmansk, a port city in northern Russia. Pilots signaled distress soon after takeoff, the news agency Interfax reported, and the plane circled back for an emergency landing.

Officials said on Monday that both flight data recorders had been retrieved, and local news outlets reported that the Investigative Committee of Russia, a law enforcement agency, was looking at the inexperience of the pilots, along with mechanical or weather-related problems, as possible contributing factors.

Flightradar24, a site that tracks transponders on planes, showed the aircraft, a Sukhoi Superjet, flying in a loop around the airport before returning. The jet bounced on touchdown and then came down again, hard, and burst into flames. The Russian health minister, Veronika I. Skvortsova, said on Monday that 40 people had died; late Sunday, officials had said that there were 41 victims.

Videos showed the plane skidding along the runway with its nose angled upward, its main landing gear apparently collapsed, its engines and fuselage scraping the ground and flames streaking out behind. Later, flames spread on the tarmac, suggesting that fuel was leaking and burning, as passengers descended the inflatable emergency slides and fled from the wreck. 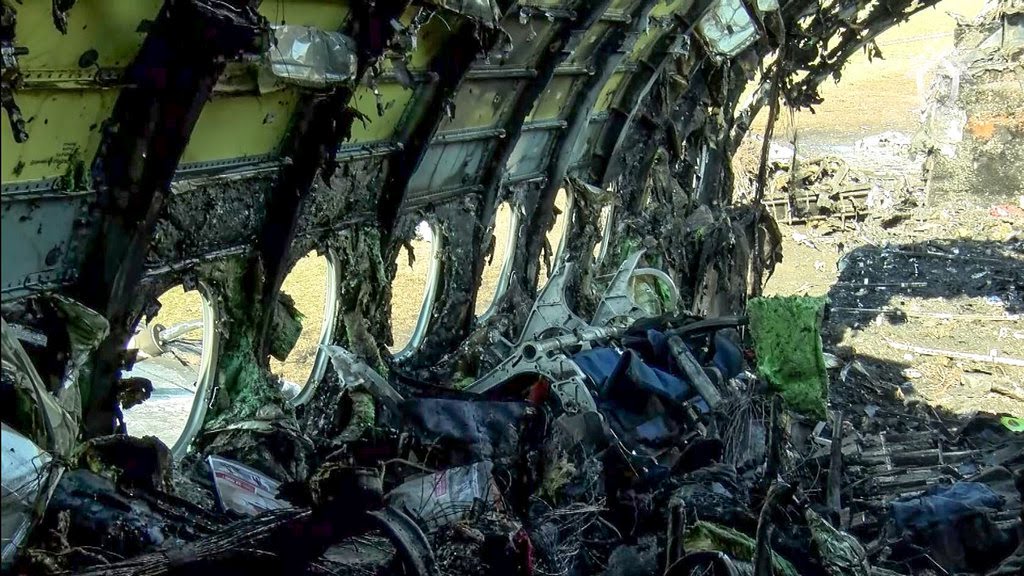 On Monday, Interfax cited an unidentified official saying that investigators believed lightning had struck the plane. “According to the main version, at an altitude of about two kilometers, the crew signaled an emergency because of a lightning strike and the failure of the radio and other electronics.”

Lightning strikes airliners thousands of times a year, but it rarely causes even minor problems, because modern planes are designed to withstand it. Pilots generally avoid thunderstorms and typically would have instruments aboard to navigate clear of them. A website posting weather information showed a thunderstorm about 15 miles north of the Sheremetyevo airport as the jet flew in that area at the time.

Interfax said the pilots then landed with full fuel tanks because they could not coordinate with the tower to “maneuver to discard” the jet fuel. It was unclear whether the pilots would have dumped the fuel or circled to burn it off, had they been able to contact the tower.

Using a transponder to send coded signals, the pilots first indicated that their radio had failed — a problem, though not usually a severe one — and then, just four minutes before landing, communicated that they had an emergency on board, the radio station Echo of Moscow reported.

Another Russian radio station, Kommersant FM, reported that some passengers had slowed the evacuation by insisting on retrieving their hand luggage from overhead compartments, even as those behind them clamored to exit the burning plane. As passengers groped for baggage, a lethal bottleneck formed in the plane’s single aisle, Interfax reported.

Other Russian news media reported that most of those who died had been sitting in the rearof the plane. The news agency Tass reported that one flight attendant, Maksim Moiseyev, died while trying to open a rear door.

In training, Aeroflot flight attendants are taught to evacuate a plane by yelling repeatedly at passengers, at the top of their lungs, to leave hand luggage behind.

A news portal, Baza, posted what it said was an audio interview with one of the pilots, Denis Yevdokimov. Its authenticity could not be confirmed independently, and it would be unusual for a pilot to give an interview to media while an investigation was underway. 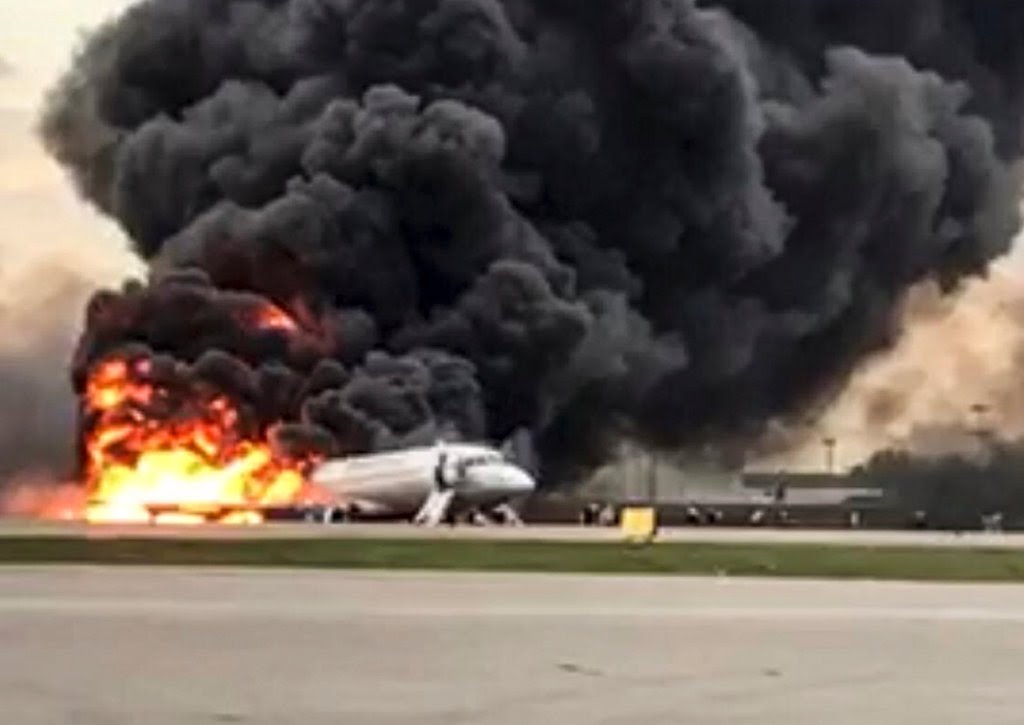 In the recording, the person said to be Mr. Yevdokimov says the crew lost radio contact because of a lightning strike, and that the landing at first seemed to have gone “smoothly.”

The Russian minister of transportation, Yevgeny Ditrikh, said he saw no reason to ground the Superjet, the main domestically produced passenger airliner. Safety concerns with the model, Russia’s first newly designed, post-Soviet passenger plane, emerged soon after its introduction in 2008.

Dozens of employees at the Siberian plant were the plane is manufactured were found to have faked their university engineering diplomas. In 2012, a Superjet crashed into a mountain in Indonesia during a sales demonstration flight, killing all 50 aboard. An investigation cited pilot error.

On Sunday, RIA Novosti, a Russian state-run news site, initially reported that all passengers had evacuated safely, even as videos showed the plane engulfed in flames. Before authorities announced the death toll, Aeroflot issued a statement praising its crew for a swift evacuation.

“The evacuation was carried out in 55 seconds while the industry norm is 90 seconds,” the statement read. “The commander of the aircraft was the last to abandon the burning machine.”

“The crew had to request an emergency return to the airport,” the statement added. “After landing at Sheremetyevo, the engines caught fire and were quickly put out. The passengers evacuated the aircraft on emergency slides. All in need were provided medical care.”

But cellphone videos shot aboard the plane and from inside the airport terminal were enough to quickly dispel claims that the evacuation had gone smoothly. One taken inside the plane as it landed showed a scene of panic and terror on board. Flames leapt outside a window, and as smoke wafted through the cabin, one woman screamed and another yelled, “Help! Help!”

On Monday, an anchor on Echo of Moscow suggested that officials had at first been sugarcoating the news, only releasing the full death toll after most Russians had gone to bed. “Maybe they worried about our peace of mind,” he said.

At Aeroflot, It’s Patriotism Over Profits as Russia Pressures IndustryNOV. 12, 2015 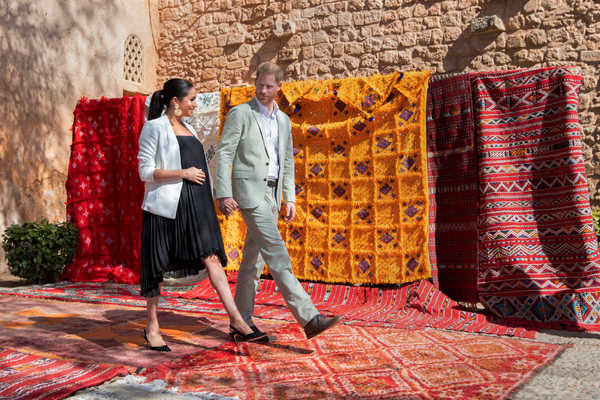 Meghan, Duchess of Sussex, Gives Birth to a Boy 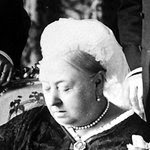 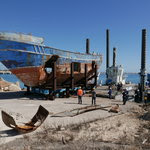