Over the weekend, rising Decatur-bred singer, Jacqueesdubbed himself the King of R&B. The 24-year-old Cash Money signee took to Instagram to say “f**k it.” Despite being fully aware of his predecessors, the “B.E.D.” crooner said he’s the “King of R&B for this generation.” The bold proclamation sent the internet into a state of emergency with soulful heavy hitters like Tank, Tyrese, Chris Brown, as well as Pleasure P, J. Holiday and fans alike weighing in on who actually can and should claim the throne.

#PressPlay: Do ya’ll think #Jacquees is the King of R&B for this generation?

J. Holiday didn't namedrop, but alluded to R. Kelly, Chris Brown, Usher and himself as the true Kings of R&B

Pretty Ricky lead singer Pleaure P, who wants "all the smoke," issued a hilariously savage message to the DC-bred singer. "So J. Holiday, let me holla at you real quick," the "Boyfriend #2" singer began. "You know you my bro, but first and foremost, the two gentlemen that has a song called 'B.E.D.' shouldn't be arguing amongst the R&B community. Secondly, [for his generation,] he's supposed to feel like that." Then, the "Did You Wrong" waged an interesting proposition.

"Since we're all friends, we should put out a song at the same time on the same day and let the public decide who got the best record, but I'm telling y'all— y'all not f**king with your n***a right here." 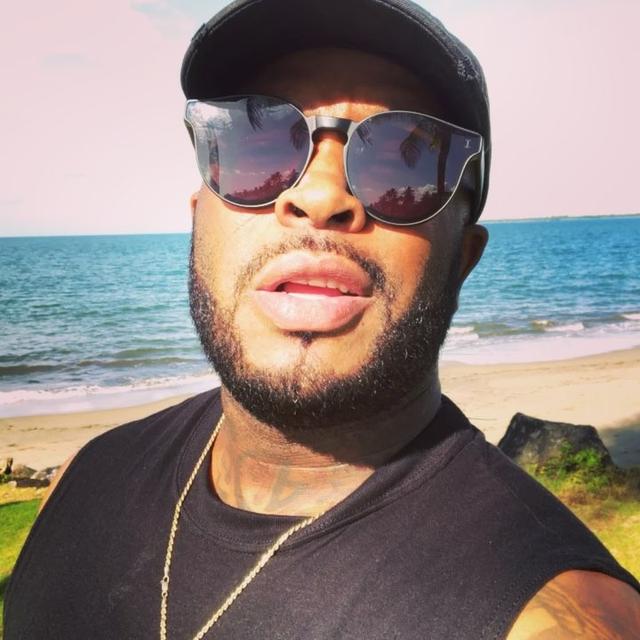 @kingjholiday you know i love you bro but i want all the smoke. Let lil bro @jacquees liv. I’m all the way in Fiji but i got time today. Let’s do a Friendly competition between all of us in R&B and see who put out the hottest record!! tell me what day n time and I’m ready for whoever. Oh and PS love n hip hop miami season 2 is on the way Jan 2 😂😂 just thought I’d drop that in there. Love you bro but you wrong.

However, Pleasure wasn't close to finish making his point. "Nobody should be the king of anything. Everybody got hits. Everybody should tour together and uplift each other. That's the problem with R&B ni**as. R&B ni**as always wanna act like they better than [the other]."

Pleasure ended his sentiments with, "n**ga shut yo ass up. Stop crying like a b*tch and get money." 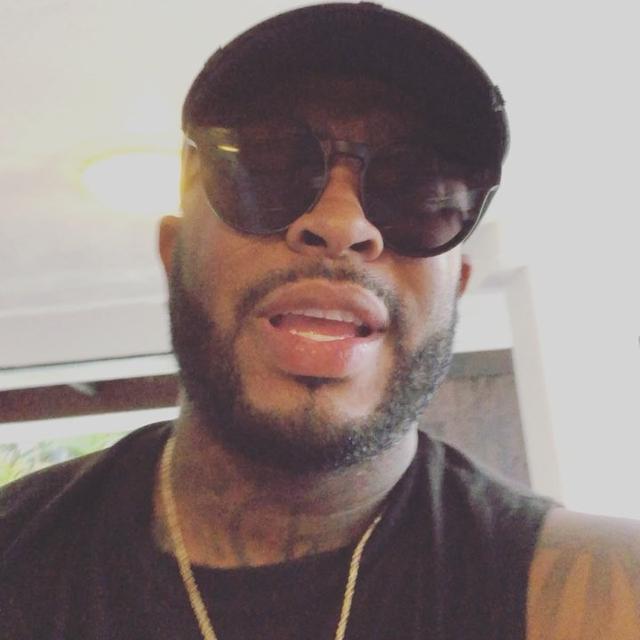 The stop crying like a bitch wasn’t directed towards @therealtank but @iamjamiefoxx @keithsweat @jodecimusic @neyo @maxwell @ericbenet joe has classics what are we saying.

Tank listed himself, Usher, R. Kelly, Chris Brown and Trey Songz as the ones with the crown

Why? His list was formulated due to reasons like vocal ability, longevity, sales, consistency and relevancy. He penned a more thorough explanation behind the Pied Piper's estranged title. "The accusations don't disqualify what he's accomplished. Second, if you can't go to the studio BY YOURSELF and make a hit record, you're not my king. If you can't sing it better live, you're not my king." 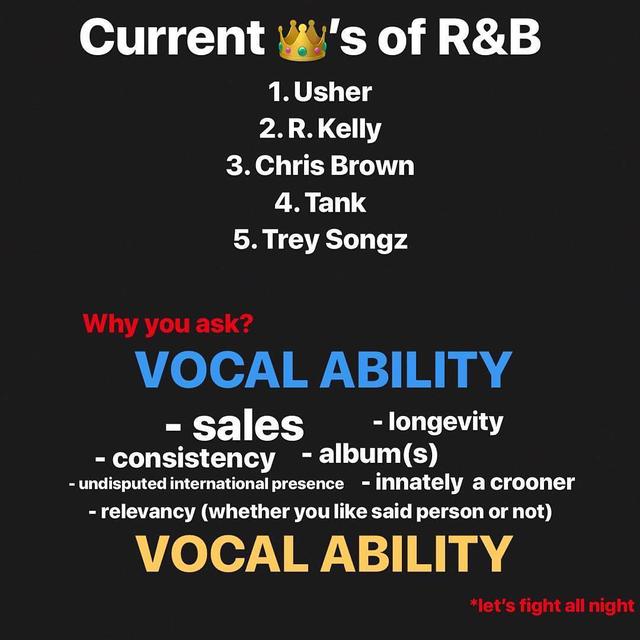 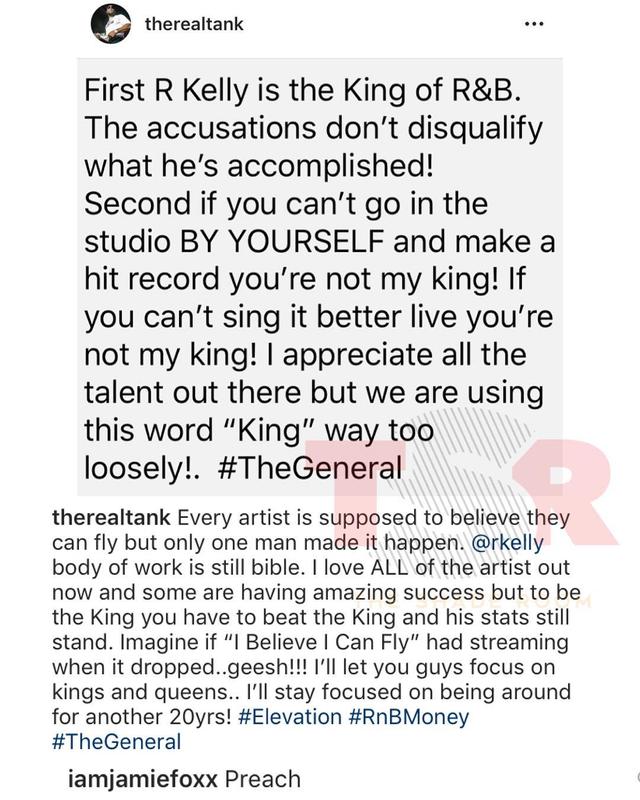 Tyrese pulled up to the war with one main question for Jacquees: "how sway? HOW?!"

"Let me put you up on what's really movin bruh. This ain't Hip Hop my n*gha," the "Sweet Lady" crooner began. "You can't come in this game, get hot for a year and then try a #T69 n*ghas and throw that there word KING around..."

Tyrese continued to fire off rounds of ammo, aimed straight at the 4275 singer. "Imma keep it a stack with you. The young kings of your generation that's been runnin sh*t is Chris Brown and Trey Songz. BIG facts! You got this out the T69 playbook. Stop trolling and get back in the booth." 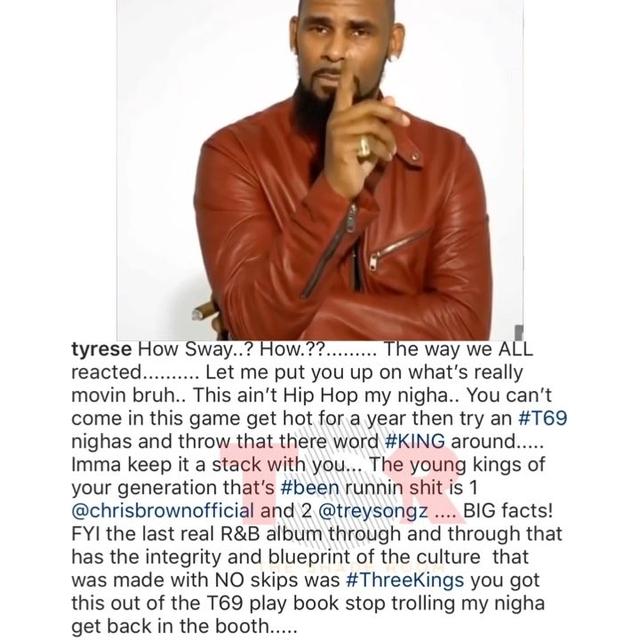 #PressPlay: #Tyrese adds his input to the #KingOfR&B debate 👀

Meanwhile, for Chris Brown, it's all love... 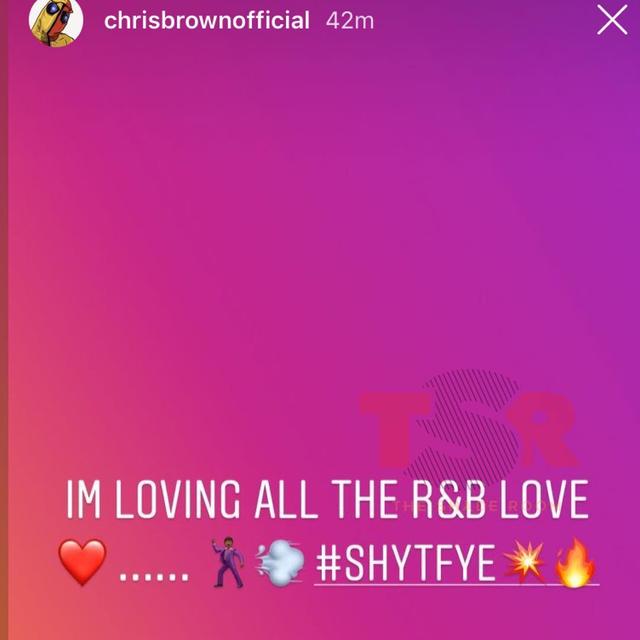 #ChrisBrown has entered the chat! Thanks fans for continuously mentioning him in the conversation regarding who’s the current king of R&B (View earlier posts)

"N**gas gotta put a lil more time in. [They] gotta actually have some hits, some consistency..."

Grab some popcorn, guys and gals. This is better than any hip-hop beef from 2018.